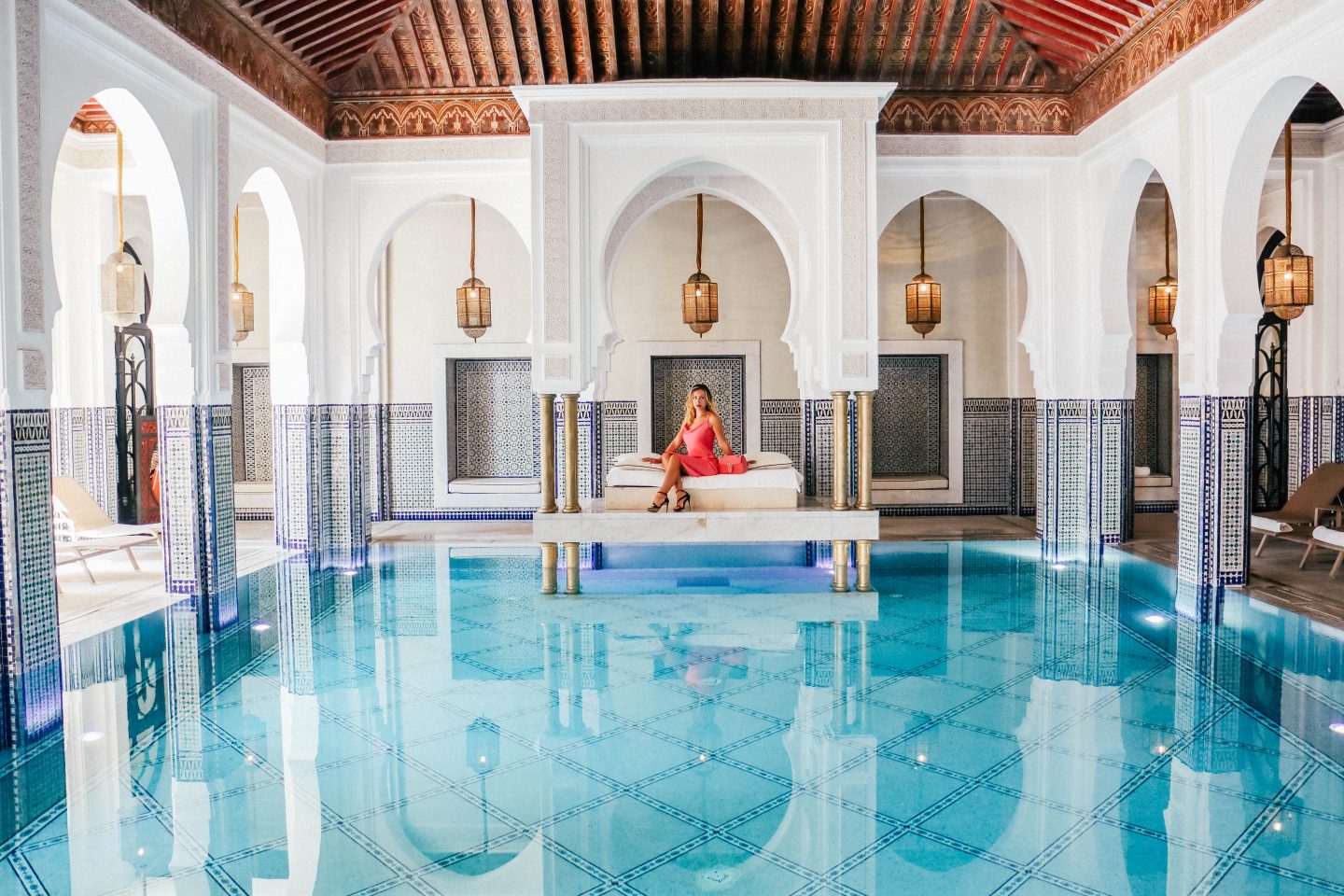 One of the places where I traveled last month was Morocco! It was a country high on my travel list and I finally managed to plan a trip there!

This trip was my first ever trip to Africa and I was really not sure what exactly to expect. Morocco, however, is not the best example of an African country, as it is a mix of various cultures, plus it has accumulated many European traditions as well.

I have heard many different opinions about the country and I, of course, some turned right and some, in my opinion, was totally wrong! What I can confirm is that the streets of Marrakech are often chaos and you have to be extremely careful with the traffic, as there are motorbikes everywhere, passing even though the pedestrian areas. The cars are often not following the traffic rules, so you have to be really careful. I would not recommend a rental car as an option!

I have also often heard that you have to be careful with thieves on the streets. I did not observe anything dangerous and to be honest I think the streets of Marrakech are very safe in that sense.

When we booked our trip we did not check when Ramadan was, and unfortunately, it turned out to be at the same time as our trip! All the shops and restaurants in the medina were still open, but the people on the markets were in general very angry and unfriendly (due to the fact that they are working during the days of Ramadan). If you are a girl, I would also recommend you to cover up, as you will get a lot of unwanted attention if you don´t! I also got shouted at..Due to this, I did not feel safe walking by myself and I would highly recommend you to go with a male friend.

Despite this, we really enjoyed our trip to Morroco! We spend most of our time in Marrakech and we also did a day trip to Essaouira, one of the most charming cities on the coast.

What to see in Marrakech

Marrakech is full of incredible places to visit and in order to see most of the places that are worth a visit without rushing, you have to stay for 3 full days in Marrakech. Here are some of my favorite places, that I would highly recommend you to visit.

is a square and market place in Marrakesh‘s medina quarter (old city). It remains the main square of Marrakesh, used by locals and tourists. For me, it was the best place to shop, as you can find all the souvenirs you might be looking for at the same market.

The Majorelle Garden is a two and half acre botanical garden and artist’s landscape garden in Marrakech, Morocco. It was created by the French Orientalist artist, Jacques Majorelle over almost forty years, starting in 1923, and features a Cubist villa designed by the French architect, Paul Sinoir in the 1930s. It is a truly beautiful villa and the garden is great too, however, the place is very small and it gets extremely crowded. I would recommend you to go there around 9am when they open, especially if you would like to take pictures before the crowds arrive.

It is also a good idea to book your tickets in advance. You can buy a combined ticket so that you can visit the YSL museum as well, which is right next to Jardin Majorelle.

The YSL Museum is a museum dedicated to the fashion designer Yves Saint Laurent! It was inaugurated October 2017 and opened to the public October 19, 2017. In January 2018, the museum received the best new public building award at the 2018 Design Awards of the British international design magazine Wallpaper.

The palace of Bahia is a nineteenth-century palace of eight hectares located in Marrakech.  It is one of the masterpieces of Moroccan architecture, one of the major monuments of the country’s cultural heritage and one of the main places of tourism in Morocco. For me personally, it was the most beautiful place to visit! It is extremely colorful and it really represents the Moroccan culture.

Koutoubia Mosque is the largest mosque in Marrakech, Morocco. The mosque is also known by several other names, such as Jami ‘al-Kutubiyah, the Kotoubia Mosque, the Kutubiya Mosque, the Kutubiyyin Mosque and the Booksellers’ Mosque. It is located in the district of the south-west medina of Marrakech. The mosque is decorated with curved windows, a strip of ceramic, pointed merlons and decorative arches; it has a large square with gardens and is lit at night.  It is a truly beautiful building, but unfortunately, you cannot enter the Mosque unless you are Muslim.

Located next to the mosque of the Kasbah, the Saadian tombs are one of the only remains of the Saadian dynasty that reigned over the golden age of Marrakech between 1524 to 1659. In the early 18th century, Sultan Moulay Ismail had indeed decided to remove all traces of the magnificence of this dynasty by demanding the destruction of all remaining vestiges. He dared not, however, commit the sacrilege of destroying their burials and ordered that the entrance to the necropolis should be completed.

Former palace, it was built by the Saadian sultan Ahmed al-Mansur Dhahbi to celebrate the victory over the Portuguese army, in 1578, in the battle of the Three Kings. Today, there remains only a huge esplanade carved gardens, planted with orange trees and surrounded by high walls. Indeed, in 1696, the Alawite sultan Moulay Ismaïl took what was richest in this palace to build the imperial city of Meknes. Since 2011, the El Badi Palace has been used as a stage for the Marrakech Laughter Festival, organized by Jamel Debbouze.

Bab Agnaou is one of the nineteen gates of Marrakesh, Morocco. It was built in the 12th century in the time of the Almohad dynasty. While Bab er Robb was the official entrance to the city, Bab Agnaou gives entrance to the royal kasbah in the southern part of the medina of Marrakech. It is also one of the best-preserved gates and it is perfect for pictures!

The origins of the complex date back to the Saadian Dynasty, more than four hundred years ago.
Rebuilt in the mid-Nineteenth century at the behest of an influential kaid of the Atlas Mountains, Le Jardin Secret has been the home of some of Morocco and Marrakech’s most important political figures. It is a massive garden in the middle of the medina and if you see the entrance from outside, you will never think that there is such a massive garden at the backyard. Le Jardin Secret has recently open for the public and it is worth a visit.

If you want to ride a camel and had a bit of a dessert experience, but you do not have time to spend one day out to get to the actual dessert, you can visit the Palmeraie area near Marrakech. It is only 25 minutes ride from the medina! That area of Marrakech is also full of 5-star hotels and luxury villas, so you will see a lot of beautiful places on the way.

Where to stay in Marrakech

Marrakech is famous for its riads and despite the fact that the city also has many nice hotels, I would highly recommend you to stay at one of the beautiful Riads! We wanted to create different content, so we decided to split our stay in between two beautiful riads: Riad Adore and Riad Houma.

The whole of the medina is full of old riads, which used to be the houses of rich families. A riad is a house on two or three floors with a courtyard in the middle, which often has a swimming pool. What I loved about the riads, is the fact that it is a paradise away from the heat and the busy streets of the medina. They are also beautifully decorated and it feels like staying at an oriental place rather than a hotel.

An important part of the Moroccan culture, is, of course, their food and traditional dishes. Marrakech is full of amazing restaurants, and we managed to visit a few that we absolutely loved!

If you want to go to a rooftop restaurant with great atmosphere and views, I would highly recommend you to visit:

For dinner, I would highly recommend you to visit:

Ksar Essassouan – it is a beautiful house that has been turned into a restaurant, the atmosphere of which is very authentic and the food was amazing too!

lmarrakchi – a typical Morrocan cuisine with an amazing view over the Jemaa el-Fnaa market! It also has live music and the dinner is on candles, which makes it super romantic.

Marrakech is particularly famous for its amazing spa centers. The city is full of such places, but the absolute best ones, in my opinion, are the spa centers at the Royal Mansour and La Mamounia hotel. These are also one of the most luxurious hotels in Marrakech and are definitely worth a visit!

Essaouira is an ancient city on the Atlantic Ocean that is famous for its fish markets. It is full of beautiful blue fisher boats and it has a special atmosphere! The medina is full of different markets and on the port, you can find an amazing fish market. Essaouira is a UNESCO heritage site and has various beautiful sites to visit!

It is about 2:30h drive from Marrakech and it is perfect for a day trip! On the way, you can also stop to see an argan oil factory, where you can observe the whole process of producing the argan oil! The process is almost entirely hand-made and it is very interesting to observe it!

Another amazing thing that we saw was goat climbing! I have never seen anything like that before! On the way to Essaouira you will see trees with goats on it, which is really an unbelievable scene! It has become very popular in recent years and you will see many tourists stopping to take pictures! I was, of course, one of them!

We did the tour to Essaouira with a tour company called WithLocals! We really enjoyed the experience, as the tour is organized by a local person who takes you around (it is a private tour) and explains many different things, about the culture, the history, and the customs of the nation.

I really enjoyed our trip to Morocco and I am certainly planning to go back as I want to go to a desert safari where you spend 3 days in the desert! Another place I want to visit in Morocco is Chefchaouen, which is a city all painted in blue!

I hope you enjoyed this travel guide!