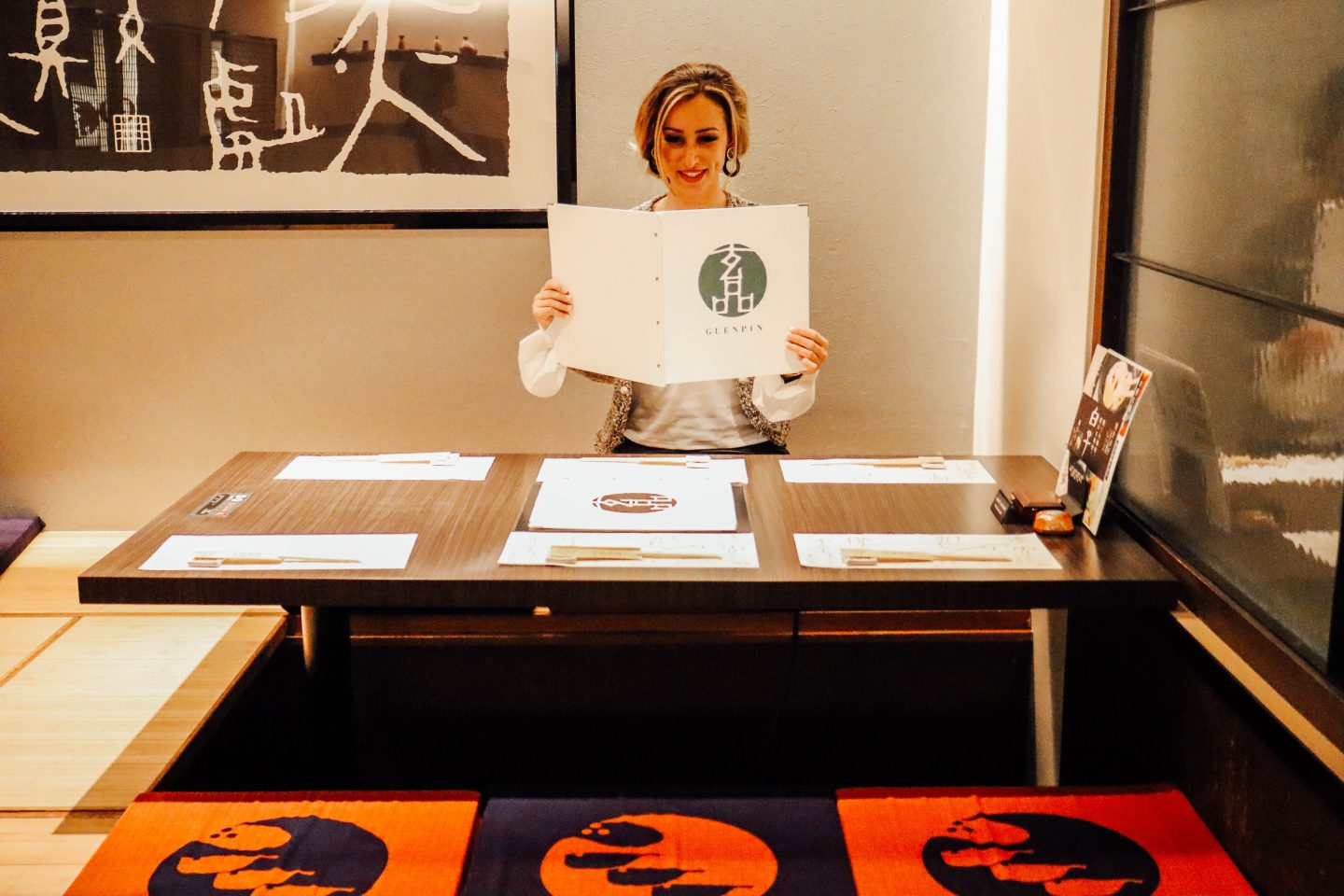 Osaka the third stop on our Japan trip, after Tokyo and Kyoto. We wanted to visit the city for a couple of reasons, but one of them was the fact that it is famous for its many restaurants and delicious food!

Indeed Osaka is full of amazing places to eat at and we recommend you to make a stop if you want to enjoy the food part of the tourism. The cousins offered in Osaka are from all over Japan and you get the chance to try various typical things.

What we really wanted to try while in Osaka was a Tiger Puffer Fish Restaurant. When it comes to that fish you have to be very careful as it is extremely poisonous, if not prepared the right way!

We wanted to try it but we had to be 100% sure that the place with go to is secure. So we did a bit of research and we decided on Guenpin restaurant!

Guenpin has around 90 restaurants in Japan and also a few restaurants in China and Singapore, and the chain specialises in Tiger Puffer Fish. It is one of the most recomended places across the internet and I must say we were very pleased with our dinner there!

The Tiger Puffer fish is also referred to as Fugu in Japan and it is highly toxic and there is no antidote for it, but despite of this, or perhaps because of it—it is considered a delicacy in Japan.

The fish contains lethal amounts of the poison tetrodotoxin in the internal organs, especially the liver and the ovaries, but also in the skin and the testes. Therefore, only specially licensed chefs can prepare and sell fugu to the public, and the consumption of the liver and ovaries is forbidden. But because small amounts of the poison give a special desired sensation on the tongue, these parts are considered the most delicious by some gourmets.

During our dinner at Guenpin we had a 6-dish course, each one of which was prepared with the Tiger Puffer Fish. First, we had a deep fried, and we were extremely surprised to find out that it tasted a lot like chicken! Then we had a dish prepared with the skin of the fish. It´s skin is pure collagen and did not really have any fish smell. It was quite soft and slightly chewy. The next dish we had was a Thin Slice Fugu Sashimi, which is basically a dish made of small slices of raw fish. As with the previous dish, it did not really have a smell of fish. I do not usually eat raw fish, but I actually liked this one. That dish was followed by a Fugu Hotpot.

The hotpot was my favorite part of the dinner! It is prepared in front of you, as each table has its own hotpot grill. You basically put the ingredients in the boiling water in front of you and in less than 5 seconds they are cooked and ready to eat!

In addition to the Fugu courses, we also wanted to try some sushi! We picked the only Guenpin restaurant in Osaka that also offers sushi, as we really wanted to get some sushi while in Osaka! It was absolutely amazing. The fish is basically made right before your order and the rice is extremely soft! I have never had such a good sushi in my life before! The ones that are sold in Europe are not even close to the real Japanese sushi. I bet it has to do with the fact that the fish is not so fresh, but also the rice was incomparable!

The sushi was followed by two desserts, homemade ice cream that I absolutely loved and a zosui pudding (one of the typical Japanese desserts)!

To finish the dinner we had one of the special drinks at the restaurant! It also contained Fugu. The drink was sake (the most traditional Japanese alcoholic drink) and Tiger Puffer Fish that is brought raw and cooked in front of you before it is put inside the drink. It brings a special flavour to the sake and makes it warm, which was quite a different experience from trying sake on its own. Definitely, something to try if you want to go for an unexpected taste.

If you are in Japan and you want to try something that is prohibited to enter Europe, Canada, the US and many other countries, go to a Tiger Puffer Fish restaurant. Remember that you have to be careful with the place you choose and if you want to be a 100% sure go to Guenpin. After all, we are the living example that you will survive the FUGU fish!