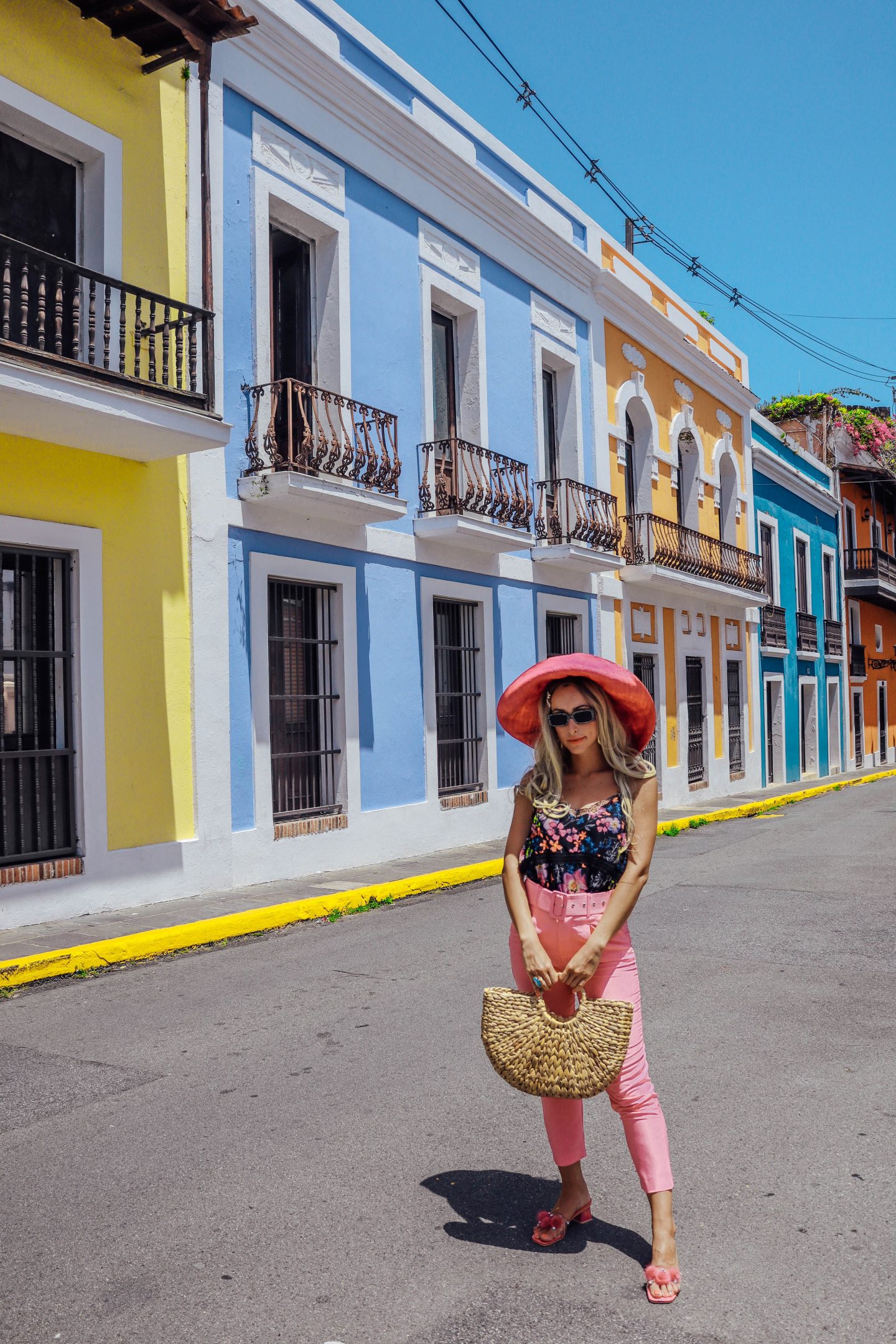 Streight after my trip to the Dominican Republic back in May, I went to visit Puerto Rico! It was a spontaneous trip, which I decided to do as I was very close to the island and had a couple of days free!

I love reggaeton and the whole Latin culture and Puerto Rico has always been on my to-visit list! So I felt like now was the time since it was only one hour flight away!

I spend there 4 nights and my plan was to just explore San Juan peacefully. Usually, when I travel, I have a huge list of places I want to visit and I end up completely exhausted after all the rushing and travel time. That is why I decided that this time I will take it easy and just explore the capital peacefully.

San Juan was the first settlement on the island after the Spanish arrived in 1521. For that reason, it also became the capital of the Island. It wasn’t long before San Juan gained the attention of other European countries and the first pirate attacks began in 1528 when the French razed the settlements around San Juan.

Today, San Juan is Puerto Rico´s most important seaport and is the island’s manufacturing, financial, cultural, and tourism center. It is also the oldest city under U.S. jurisdiction. San Juan is also known as the Caribbean’s main cruise port and is home to more than 28 different cruise lines which bring millions of tourists to the city each year.

Old San Juan is the second oldest city in the Western Hemisphere. It is actually an island connected to the main island by bridges on the eastern side. The oldest section is on the west side and walled in on 3 sides. The historic city is divided into seven square blocks. It´s church La Iglesia de San Jose is the oldest functioning church in the American territories.

The old town was certainly my favorite place in San Juan! It is full of beautiful old houses on 2, maximum 3 floors, all painted in different colors. It is an extremely colorful place, full of souvenir shops and art galleries. It also has more than 400 restored buildings from the 16th and 17th centuries.

I am sure many of you have already seen Old San Juan on your tv screens, at it is the filming site for scenes in many famous movies such as Dirty Dancing, Havana Nights, The Rum Diaries, Amistad, Pirates of the Caribbean: Strange Tides, and Fast Five.

What to see in San Juan

As I said above, Old San Juan was my absolute favorite thing on the island. It is a must visit place when it town, as it is full of beautiful old buildings, colorful streets and art galeries.

Puerto Rico is known as the Dining Capital of the Carribean! I think this statement is good enough to convince you that you must try the local food in Puerto Rico. It is a fusion of various Carribean cuisines and it is full of flavor. The city is full of cute restaurants offering local cuisine. In some of them you can find the waitresses dressed in typical Carribean dresses, which are super pretty!

Fort San Cristóbal, is the fort in San Juan, Puerto Rico. It was built by Spain to protect against land-based attacks on the city of San Juan. It is part of San Juan National Historic Site. It is the largest fortification built by the Spanish in the New World. When it was finished in 1783, it covered about 27 acres of land and basically wrapped around the city of San Juan. Entry to the city was sealed by San Cristóbal’s double gates. After close to one hundred years of relative peace in the area, part of the fortification (about a third) was demolished in 1897 to help ease the flow of traffic in and out of the walled city. The rest of the fort is still preserved and open to visitors, so make sure to go check it out if you are in San Juan.

Apart from the amazing local food, you also have to try the local coffee if you are a coffee lover! The coffee in Puerto Rico is known for its distinctive, smooth rich flavor, which is due to the volcanic soil and mountainous farmland of the island.

The old town is full of charming coffee shops. One of my favorites was the Cafe Cuatro Sombras. You can also buy packs of bean coffee from there, if you want to bring some home!

The whole city of San Juan is full of artists and beautiful art galleries that are worth a visit! I had a couple of favorite ones in the Old Town, but unfortunately, it was impossible to carry back all the art that I liked from there! However, most art galleries also offer courier services, so they can deliver straight to your doorstep abroad.

If you are a water lover, and you want to go out on a day trip from San Juan, you have to visit Culebra! It is one of the most beautiful beaches in the whole of Puerto Rico. Its clear waters make it perfect for skydiving. Culebrita Island is one of the most picturesque places on the whole island, so if you have a spare day and you enjoy diving, definitely book a trip there!

The most popular drink in Puerto Rico as well, as most of the Carribean is the Rum! I am pretty sure that you have all heard about the Bacardi Rum. If you are a fan of rum, or just curious to find out more about the process of making rum, you have to visit the Bacardi Factory.

Another great experience to try in San Juan is the vibrant nightlife. The majority of the clubs play reggaeton and if you are a lover of this music, going out in San Juan is a must-do thing!

There are a couple of areas where you can go! One of the best areas is La Placita de Santurce ! It is an area full of bars and restaurants and in the night it turns into a square of nightclubs, where you can see people dancing on the streets and hear some live music! It is a place with a special spirit, which I recommend you to visit in order to experience the true spirit of Puerto Rico.

If you are looking for more sophisticated places, you should go to the Peninsula of Condado. It is full of posh hotels and beautiful rooftop bars.

During my visit in San Juan, I stayed at a beautiful Boutique Hotel on the Peninsula of Condado. The peninsula is an excellent place to stay, as you are on the best beach area in the city. It is also one of the most touristic areas, full of restaurants and bars, and it is very nice for a walk in the evening. Certainly, one of the most vibrant areas in the evening.

I stayed at the O:live Boutique Hotel , which was not only extremely pretty but also had an incredible view from the rooftop bar. It also had a swimming pool at the rooftop and it was a great place to chill during your visit!

The old town is also a great place to stay in San Juan, but it is not very vibrant during the nights, which is why I preferred the peninsula.

What I loved about this island is that everyone is extremely friendly! Even the policemen! They let me sit on their motorbike and even take pics with them! 😀

Also, the island is a very safe place! It was two of us (girls) and there was not even a single moment when we did not feel safe! The best way to travel around San Juan is with uber.

Hope you have enjoyed this short Puerto Rico Guide!