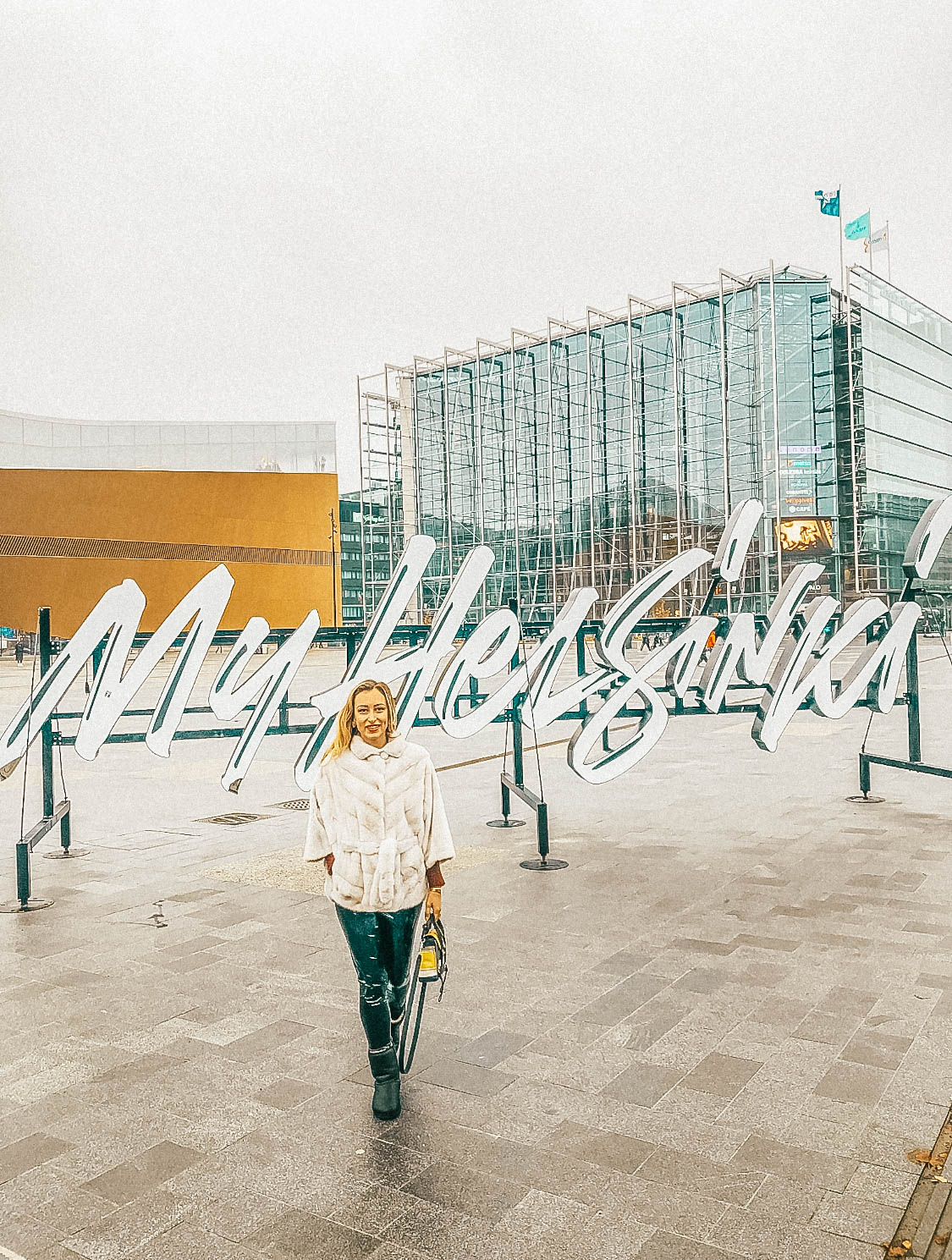 Two weeks ago I visited Helsinki, as I was invited by the Helsinki tourism board! I did not know what exactly to expect from this city, as it was my first visit there, but I was really excited to explore it, and guess what! I absolutely loved it!

Helsinki was founded by Swedish King Gustav I in 1550 as the town of Helsingfors. Gustav intended for the town to serve the purpose of consolidating trade in the southern part of Finland and providing a competitor to Reval (today: Tallinn), a city that dominated local trade at the time. It did change its original location since then and moved more to the coast, so there is not much left of the city since the time of King Gustav.

Finland became a republic only 101 years ago, in 1917, and Helsinki as a capital city went through a lot of changes for these 100 years. In 1917, most of the buildings were wooden, which is something typical for the Finnish culture, and there were barely any pavements on the roads!

What I loved about it so much, is that despite being the capital, it is not a crowded place. I was staying right opposite the Parlement building but was still able to enjoy nature, as only about 10 minutes walk from me was starting a massive park, followed by a forest area! In my opinion, Helsinki is one of the most ´green´ capitals in the world, where you do not see much pollution and where you have direct access to nature, without the need to drive for an hour outside of the city, which is usually the case!

As I visited at the beginning of Autumn, it was the perfect time to visit some saunas! I loved the fact that there is barely any building in the city, that does not have a sauna (after all the sauna was invented by the Finnish people)! The sauna is another excellent way to connect to yourself and the nature, as it brings you in direct contact with the ground (the wood), the water and the fresh air that you have to take after staying at the sauna! I personally feel much more relaxed after every visit to a sauna place!

What to see while in Helsinki

There are many things to see while in Helsinki and for that reason I stayed there for one week. It was a great decision, as I got to explore the city peacefully, without rushing and I also got to understand the Finnish culture and learn a lot about the country!

As I said above, the city is full of public saunas, so this is certainly one thing to do! One of my personal favorites was the Allas Sea Pool, a public sauna by the port, which has incredible views over the port and nearby area, as well as two outside pools, one with heated water and one with ocean water. The other one that I would highly recommend you to visit is Loyly – it is a sauna with very modern architecture and it has an amazing restaurant too!

An interesting fact is that Finland has been frequently ranked as the happiest country in the world. There are a lot of reasons for this, but one of them may be that Finns know how to slow down and relax. In a country of 5.5 million, there are over three million saunas. In other words, just about every Finn is addicted to löyly, the rush of warmth you feel when water hits the sauna rocks and produces a burst of steam. I can keep talking about the saunas for a long time, but lets move to the next things to see while in Helsinki!

Suomenlinna is an 18th-century sea fortress and nature area with centuries-old artillery and defensive walls, spread across 6 linked islands. The islands are only about 15 minute away from the port in the centre of Helsinki and once you get to the islands, you will need about an hour to walk around! Not all of them are accessible, as some are still used as a military base, but the ones that are open to the public are really pretty, so certainly go check them out if you are in Helsinki. What I absolutely loved there are the little houses, which you will see below, that are arguably what inspired the author of ´Lord of the Rings´ in creating the same houses. However, in reality these were only guns storages, and no one ever lived there.

The church was originally built from 1830-1852 as a tribute to the Grand Duke of Finland, Tsar Nicholas I of Russia. It is one of the most impressive buildings in the city and an absolute must-see place! The square in front of it is very nice too!

If you visit Helsinki during the summer, a fun place to go to is the Linnanmaki attraction park! Unfortunately, during the winter months, it is closed, as the weather does not allow it to function.

The place is known as the old main port of Helsinki! It is a great spot for pictures, to have a walk around or to get some great views! There is a market in the square, so it is also a great place to get some local products and souvenirs!

One of the areas that are a must-visit in Helsinki is the design district! I visited the design museum and I loved it as it shows you different amazing designs from various Finnish designers, that are extremely talented! What is amazing about this area is that it is full of designer shops, where you will most often see the designers working! Apart from being shops, these spaces are also their ateliers, so you see how everything is done! It is also a great place for shopping if you want to get some original clothing, furniture or accessories!

Helsinki is full of amazing museums, but if you have to choose, the one that you absolutely have to visit is the National Museum of Finland! You will get to know many things about the nation, the culture, and the history, and I absolutely loved the exhibitions there!

Another museum that you should visit is the Amos Rex Museum! It is an art museum dedicated to Amos Anderson, which opened in 2018 and rapidly reached international popularity by gathering more than 10,000 visitors in a matter of weeks. What is truly impressive about this museum is the outside facade! Well and the art inside of course!

As I mentioned above, Helsinki used to be made out of wooden building up until 100 years ago! If you are curious about how that looked, you have to visit the wooden house district! It is full of beautiful wooden buildings, and it is a nice place to have a walk around!

In order to celebrate the 100 anniversary since the Republic of Finland was established, the government asked the citizens of Helsinki what building they want. The majority voted for a public library, so the government built one just opposite the parliament building. It has the same view as the one from the parliament so that people can be reminded that everyone is equal! It is a great place to meet with friends, to grab a coffee, or just to sit down and read!

The Zoo and the Aquarium were one of the places I really enjoyed visiting!

What I loved about the Zoo is the fact that it is situated on a little island, which is made into a Zoo! The island is connected to the city by a bridge, but you can also get there on a ferry! It is a perfect escape from the city center, and the whole concept of it being on an island is extremely original and pretty! You are just surrounded by animals and nature, and you completely disconnect from the rest of the world! I was also very excited to see some of the arctic species there!

The Aquarium is also great, it is very close to the city center, and it is right next to the Linnanmäki amusement park, so it is a great opportunity to explore the two of them at the same time! If you are into the sealife world, I am sure you will love to visit the aquarium!

One of the best places to go shopping is around the design district as mentioned above! Another great place is the Stockmann department store and the shopping street in front of it, which is the central shopping street! There are of course many shopping centers across the city too!

There is not exactly such a thing as best time to visit, as it really depends on what season you personally prefer! I would say to avoid January and February as these are the coldest months and if you are not used to the cold weather it might be a bit too much for you! Otherwise, all other months are great for a visit! I visited at the end of October and I loved all the Autumn vibes! The colors of the trees were truly impressive! Also, I liked it as the weather was not too cold for walks and we pretty much went walking to all the central spots!

I was seriously impressed by the food in Helsinki! Everything was extremely fressed and tasty, and in general, the meals were very healthy too! I didn´t really see many fried options in the menus and the food was very seasonal, to ensure that all the ingredients were fresh!

The city center is full of incredible restaurants, and most of them have great lunch menus, so definitely explore them for lunch! There are many dinner options as well, but the dinner tends to be more expensive and if you want to go to a nice restaurant, it would most certainly be in the range of 100 euros for 2! What you have to certainly try while in Helsinki is the white local fish and the moose meat!

The best and also often the fastest way to go around Helsinki is by bicycle. Most hotels offer bike renting, so it is easy to get one if you want. However, if you are not really into cycling, public transport is pretty good too! The taxis are a bit expensive, but the distances are usually very short, so that is an option too! In general, if you are staying in the city center, almost everything is walking distance, so no need to worry much about transportation.